Liverpool fought back with 10 men to prevent a first Premier League defeat in front of fans at Anfield since 2017 in a 1-1 draw on Monday as Darwin Nunez was sent off on his home debut.

Luis Diaz’s sensational strike salvaged a point for the Reds after Wilfried Zaha opened the scoring for Palace in the first half.

Nunez had scored in his first two appearances against City in the Community Shield and in rescuing a point as a substitute in a 2-2 draw away at Fulham last weekend.

But the Uruguayan’s headbutt on Joachim Andersen just before the hour mark left his side with an uphill challenge in the match and increasing ground to make up already in the title race.

Jurgen Klopp’s men partly dug themselves out of a hole thanks to Diaz’s brilliant equaliser, but they could live to rue another costly draw come the end of the season.

Klopp had lambasted his side for a slow start that cost them two points at newly-promoted Fulham on the opening weekend of the season.

This time Liverpool came flying out the traps, but failed to turn their early dominance into goals.

James Milner, Nunez and Mohamed Salah were all guilty of failing to hit the target with big chances, while Harvey Elliott’s goalbound shot was blocked by Andersen.

Salah should then have done better when he headed Trent Alexander-Arnold’s pinpoint pass tamely into the arms of Vicente Guaita.

Palace had barely been in the opposition’s half for the first half-hour, Patrick Vieira’s gameplan to flood the midfield and play Zaha up front paying off for the opening goal.

Nat Phillips started at the heart of the Liverpool defence in the Premier League for the first time since the final game of the 2020/21 season due to injuries to Ibrahima Konate and Joel Matip.

His lack of pace up against Zaha was exposed as Eberechi Eze wriggled free from the Liverpool press to play the perfect ball in behind for the Ivorian to break the offside trap and curl beyond Alisson Becker into the far corner.

Liverpool should still have been level before half-time as Nunez mishit a glorious chance and the ball floated back off the post.

His nightmare home debut was complete on 57 minutes when he lashed out at Andersen with a headbutt that will also see him miss upcoming games against Manchester United, Bournemouth and Newcastle.

Despite their numerical disadvantage, Liverpool refused to let their proud home unbeaten record either side of the behind-closed-doors era of coronavirus restrictions go.

Diaz led the fightback with a terrific individual run and arrowed finish into the far corner to level on 61 minutes.

The red card did not deter Palace from their plan to sit deep and counter-attack, and it nearly worked.

Zaha should have restored the Eagles’ lead when he hit the post with the goal gaping form Cheick Doucoure’s cross.

Salah had one final chance to complete a remarkable comeback from the 10 men, but his effort from the edge of the area flew inches wide. 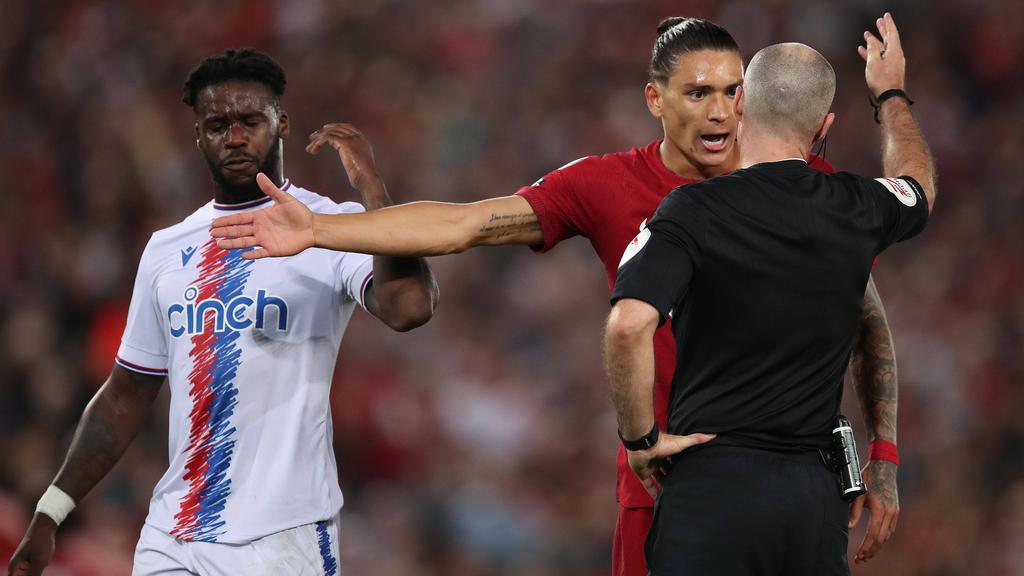