Arsenal consolidated their position in the Premier League’s top four with a 4-1 rout of Leeds in the only Premier League match on Saturday to survive a wave of coronavirus postponements.

Two goals from Gabriel Martinelli and Bukayo Saka’s deflected strike put the Gunners 3-0 up before half-time.

Raphinha’s penalty pulled a goal back, but Emile Smith Rowe rounded off a miserable week for Leeds after their 7-0 thrashing at Manchester City on Tuesday.

“We were really lucky to play today with everything that’s happening,” said Arsenal boss Mikel Arteta. “I told the players to enjoy the game and give everything because I don’t know how this will develop.”

Arteta’s own positive case back in March 2020 accelerated the Premier League’s shutdown for three months at the start of the coronavirus pandemic.

Six of the 10 matches in the English top-flight scheduled for this weekend have been called off due to a surge in cases due to the new Omicron variant of the virus.

A meeting of the 20 Premier League clubs will take place on Monday to decide whether to go ahead with the Boxing Day fixtures next weekend or to halt the season temporarily.

Arteta has called for more consistency in the decision making over when matches are called off after the Gunners were forced to play their season-opening game against Brentford in August despite an outbreak.

“Now it’s play as you can and we’ll play as we can,” said Arteta. “The Premier League will make the best decision for everybody, but we want to play all under the same rules.

“That’s where I think they have to come forward. Whatever they decide is best for the competition has to be explained.”

Leeds boss Marcelo Bielsa described his side’s performance at the Etihad in midweek as the worst in his four years in charge and there was no sign of any improvement from his injury-hit squad.

However, the Elland Road crowd remained behind the Argentine as they chanted his name in the closing stages.

Bielsa was without England internationals Kalvin Phillips and Patrick Bamford, captain Liam Cooper and Spain forward Rodrigo amid an injury crisis that saw 15-year-old Archie Gray earn a spot on the bench.

“The first half we could have lost it by more goals,” admitted Bielsa.

Arsenal moved into the top four for the first time in more than a year with victory over West Ham on Wednesday and opened up a four-point gap on the chasing pack for a place in next season’s Champions League.

Pierre-Emerick Aubameyang was absent once more for the Gunners after being stripped of the captaincy by Arteta for a disciplinary breach.

His absence has given Martinelli the chance of a consistent run of Premier League starts for the first time since the bright start to his Arsenal career was interrupted by a series knee injury in June 2020.

The Brazilian has scored four times in his last six games as Arsenal.

Illan Meslier was helpless for the opener when Alexandre Lacazette robbed Adam Foreshaw inside the Leeds box and Martinelli slotted the loose ball into the top corner.

The 20-year-old showed his pace and poise in front of goal to double Arsenal’s lead with a dink over Meslier from Granit Xhaka’s pinpoint pass on 28 minutes.

Leeds had a three-goal deficit to overcome at half-time after Saka’s deflected shot left Meslier wrong-footed three minutes before the break.

The hosts at least showed some spirit in the second period and pulled a goal back when Raphinha fired a penalty into the top corner after Joe Gelhardt had been brought down by Ben White 15 minutes from time.

Arsenal have blown the lead in their last two away league games at Manchester United and Everton, but there was no collapse this time. 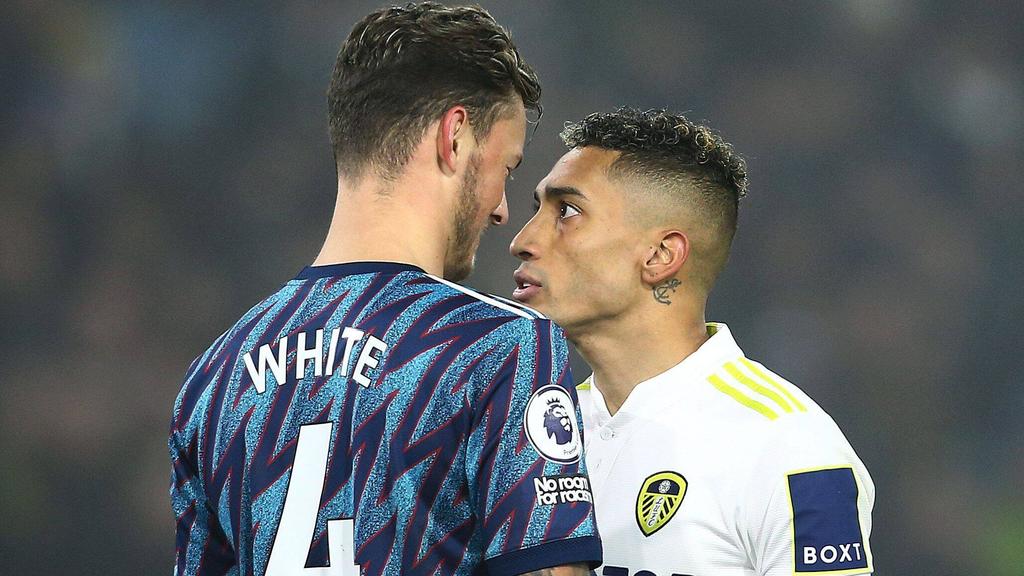